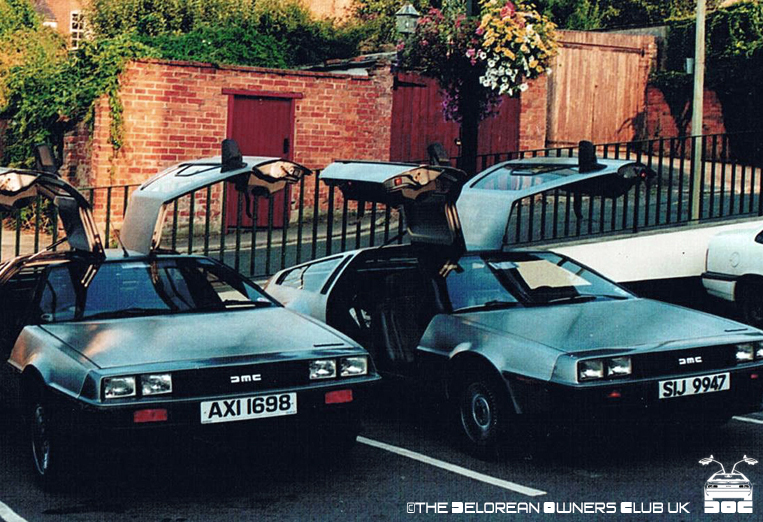 In the 1980’s and early 90’s there was little or no access to the internet. If you wanted any information about old cars (or any other issues), you had to write to people or phone them up……providing you had any contact details in the first place! There were some DeLorean Clubs in America, but these were of limited relevance to UK owners, who were basically “on their own”. Dozens of cars were still in the UK following the closure of the Dunmurry factory as the receivers sold off the last of the factory stock. Many of these were still in storage and unused…..some still are!

This was the background when the DeLorean Owners Club was formed in 1996 by two DeLorean enthusiasts Dave Howarth and Simon Lees-Milne, with the aim to make the DeLorean an accessible car to own and use in the UK. By the end of the first year the Club had sixty paid up members and were kept in touch by the DeLorean News magazine and newsletters, helping to keep them up to date with current club news and events around the country.

David Howarth organised events and shows and exhibited the DeLorean club stand at the major Classic Car shows in London, Birmingham and Manchester, displaying the DeLorean to a new audience of young and old enthusiasts most of whom had never seen one before. 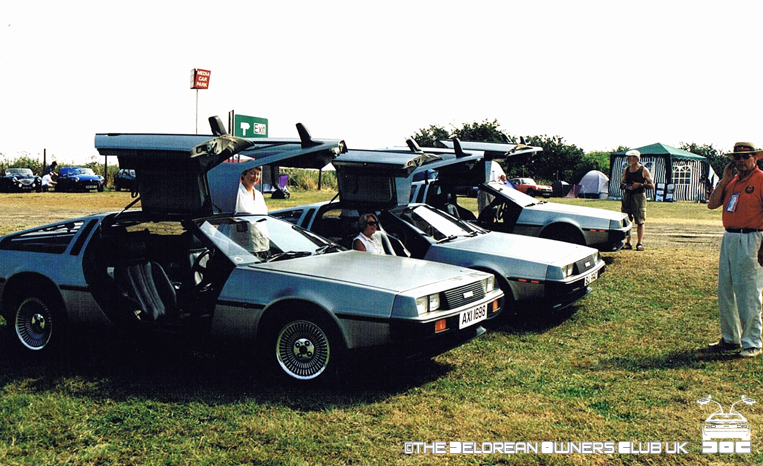 Meanwhile, Simon Lees-Milne was busy creating a register of all the DeLoreans in the country with the help of the DVLA, to reach out to all owners and to make them aware of our new club’s existence.

Today’s Club Historian, Chris Parnham, joined the club in 1998 and subsequently purchased his first DeLorean after many months of searching. It was also during this year that the DeLorean Owners Club UK first got on the web. In 1999 Simon retired as Club Secretary and Chris took over the day to day running of the club.

In 2001 Andy Withers took on the editors role and revamped our fledgling magazine into a glossy professional quality product, which would see a further redesign ten years later in 2011, in the hands of Eddie Tindall, to look comparable with contemporary off-the-shelf motoring press.

During the early 2000’s the club continued to promote the car at the NEC, Northern Ireland, Silverstone, Gaydon, Ally Pally and numerous shows and events around the county, and even further with DeLoreans appearing in Classic Car magazines and television programs in abundance.

The membership steadily increased, as did the number of cars being re-imported back into the country thanks to the Dollar/Pound exchange rate and fairer treatment on import taxes  – an average of one car every month! This unfortunately led the VAT folks to saying “These cars cant be that rare….as we’ve processed dozens of imports during the last 18 months”! We now have to fight the import duty again with every car. America is still the best source of “cheaper” DeLoreans.

Thanks to Mary Hooper and her assistants, the club was also now able to offer its own range of club wear to its members, including T-shirts, sweatshirts, caps and other club wear to show off the DeLorean marque in style.

2006 was an important year in DeLorean circles, being the 25th anniversary of the first production car and the 10th birthday of DOC UK. An international event “Eurofest” was held in Belfast, the birthplace of the car, which many UK members attended. We also held the main DOC event “Lotus 06” in Norfolk, which would later evolve into our annual Big Summer Meet, a different weekend venue each year.

At the AGM in Nov 2007 Dave Howarth retired as Treasurer and became honorary Club President. Claire Usher took over the Treasurer’s job and organization of the Summer weekend event among others. Chris Williams took over the secretary’s role and the general running of the club.

As we look to the future, with the average club member’s age only being around 28 years, we hopefully have plenty of time to cherish our special cars and to look after them for DeLorean owners to come. In the words of Chris Parnham, Club Historian: “From a lifetime of interest in Classic Cars and membership of numerous car clubs, I can say without any hesitation that DeLorean owners are special….they are all enthusiastic, often young, helpful and a generally a great bunch of folk……..read on…..into the future!”

We wish you very happy DeLorean Motoring and look forward to meeting up at forthcoming events.